LONG IS THE SHADOW OF THE BALKAN BUTCHERS

A Note, the night before another War Criminal is welcomed as a Hero

The killing fields of the Balkans in the recent decades are still steaming. The sound of the bloody wars, death and suffering of hundreds of thousands of people are still in the air. Wounds are still open and memories are loaded with rage and grief. Mass murder, pogroms, executions, ethnic cleansing, concentration camps…

Long is the shadow of the Balkan butchers. For over a decade, bloodthirsty criminals with twisted minds led likewise hordes of felons, rapists and murderers to an unprecedented ordeal, and praised themselves as national heroes and liberators from the “others”.
For another decade, people living in the Balkans witnessed how successors of butchers - such as Milosevic (and many others who escaped the justice) - were flirting with their deeds, hiding them as long as they could, making the international justice slow and inefficient. Those characters, the very successors of the Balkan butchers display affection towards democratic values in their little countries and pretend even more that they are pro-European-or-whatever to foreigners. Meanwhile, they did their best to discredit the Hague Tribunal in the domestic public in various ways. By doing so, they gained more votes from the nationalist pigs in their countries, building their own little delinquent kingdoms, and suffocating societies by the stench of their wicked fantasies and uncontrolled appetites.
Croatia, Serbia, Bosnia, Kosovo, Macedonia… They all cried when their “heroic sons” got indicted by the Hague Tribunal (ICTY) and provided them with majestic welcome upon their arrivals back home. Macedonia had this kind of a welcoming party for Ljube Boshkovski already in the summer of 2008. 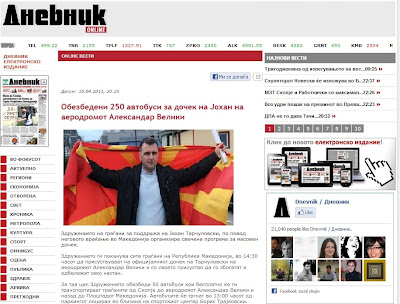 Now, the second returnee, Johan Tarchulovski - sentenced by the ICTY to 12 years in prison for his chief role in the Ljuboten massacre - is being picked up from the prison in Germany by the government’s airplane. The media are racing to run stories about the atmosphere of relief and happiness upon Tarculovski’s release, about the welcoming party that the Gruevski’s government is going to drop, starting with the ambassadors of Macedonia to both Germany and the Netherlands who rushed to welcome him at the gates of the German prison, where this war criminal served his prison sentence.
The behavior of Balkan rulers is despicable. They welcome war criminals as heroes, becoming their accomplices, approving what they have done, spitting in the face of the international justice, infuriating those who lost the loved ones.
We’ve seen this everywhere in the ex-Yu and we saw this already some five years ago in Macedonia. This time the strong reminder comes with a convicted war criminal. The government which is supposed to be one for all citizens, including those who were slaughtered by Tarculovski and his gang – actually nurtured the cult of Johan for years now. It’s time to enjoy the peak of the morbid venerations now.
Indeed, this is the government of those civilians who suffered by the acts of UCK, too, including the 12 families of missing Macedonians in 2001. This very government is the one in which the former leader of UCK Ali Ahmeti sits as a partner for six years now.
That is the government which sends an official airplane and welcomes a war criminal as a hero through the newly composed triumphal arch.
Plus: for everyone who wants to welcome the war criminal at the airport and in Skopje, there is a free bus ride (250 buses are reserved for tomorrow).
Will Ali Ahmeti be there, at the kitschy square full of monuments of other butchers? Or, will he stay in Tetovo, the city to which Ramush Haradinaj is a citizen of honor in a ceremony taking place a couple of months ago? Petty, it’s his political rival who actually was the one to honor Haradinaj in order to gain local power, unsuccessfully. Or, will Ahmeti be in Ljuboten in an attempt to comfort those in grief, those who suffered Tarculovski’s rampage 12 years ago? Maybe he will be so honorable and will try to comfort all the mothers of those killed in the battle zones on both sides back in 2001, instead. In the name of Gruevski’s government, of course.
Ahmeti aside; importantly, we know where the prime minister and his ethnic Macedonian part of the government will be for sure. Indeed, with the star of the day – Tarculovski – on the square of triumphs. And gain a few more political scores. And hurt interethnic relations even more. What about tomorrow? Should I wait until tomorrow and see what happens? I don’t think so.
Tomorrow will be just another day of the history of shame.